Rick Perry  has become a successful politician reinventing himself to fit the political trends over his very long career. Perry’s political career started as a Democrat. He was head of Al Gore’s Texas Campaign for President in 1988. Rick Perry abruptly switched to the Republican Party in 1989. The timing of his conversion was at a period when Texas was in the process of becoming a Republican dominated Red State. Over time Rick Perry has reinvented himself on many issues with the exception of economics. Presidential candidate Rick Perry is portraying himself as a free market capitalist. The question for those who believe in capitalism is, what evidence is there that supports that assertion? To borrow a line from Forrest Gump, “Rick Perry is like box of chocolates you never know what you are going to get”. Here’s empirical evidence that Rick Perry’s record is far from being a Laissez-faire Capitalist but in fact is that of a Keynesian Socialist.
1. Rick Perry used stimulus money to balance the 2010 budget.
“Perry used $6.4 billion in federal money to smooth over the state’s growing deficit. Hence Texas hasn’t been forced to enact the same sharp budget cuts over the past three years that most other states have made.” Brad Plumer
2. Rainy Day funds were never used.
The free market approach to balancing the Texas budget would of been to cut spending and use the rainy day fund thereby no additional debt is created to solve the problem. Perry’s choice was to add to the National debt by taking stimulus money as documented by The Center on Budget and Policy Priorities Spending remained at unsustainable levels and now in 2011 Texas is dealing with a 27 billion dollar deficit, With no stimulus funds available the Texas legislature is in the process of making steep cuts in many parts of the budget. Unfortunately according to the Associated Press the Texas Legislature with the cooperation of Rick Perry engaged in accounting gimmicks to push hard budget decisions into the future. A classic politically expedient move and very unethical.
3. Texas Emerging Technology Fund.
One basic principal of free market capitalism is that government’s role is to create the environment that is conducive to entrepreneurial ventures. That does not mean Government should directly help a company with either monetary aid or regulatory favoritism. To do so would give that company a competitive advantage over another company. This is a key factor in how monopolies are formed. Rick Perry created the Texas Emerging Technology fund in 2005. The taxpayer funded program was used to help companies that gave contributions to Rick Perry’s gubernatorial campaign. Examples are given in Wall Street Journal’ article Rick Perry’s Crony Capitalism Problem.
4. Rick Perry’s connection  to Merck and their Gadisil Vaccine.
Articles from various publications have covered the moral and constitutional problems with Rick Perry’s executive order. In Tom Bevan’s article Rick Perry’s Gardasil Problem he explains Perry’s actions “Gov. Perry chose to bypass the legislature and on Feb. 2, 2007, he issued an executive order making Texas the first state in the country requiring all sixth-grade girls to receive the three-shot vaccination series (which cost about $120 per shot)”
This is clearly an intrusion into the free market because it would of given Merck an instant monopoly in Texas. Putting aside the discussion of the effectiveness of these types of vaccinations, from a free market stand point other companies who may come up with an alternative vaccine would have a major disadvantage in competing with Merck’s corporatist arrangement with Government. Fortunately Rick Perry’s overreach was stopped and forced vaccinations were not implemented.
5. Rick Perry supported the TARP bailout.
Below is a copy of the letter Rick Perry in cooperation with the DGA President, sent to then Speaker of the House Nancy Pelosi in support of  the TARP legislation often referred to as the “banker bailout”. The very controversial TARP bill  is a textbook example of  Keynesian methodology of  solving problems in the economy. Bank of America one of  the major recipients of bailout funds is back in the news with serious financial problems along with other banks. TARP has failed to deliver what was promised by the Federal Government, stabilization of the financial system. Billionaire Warren Buffet recently provided a bailout of sorts by investing 5 billion dollars in Bank of America
Rick Perry was approached by a Bank of America executive after a speech, with a brief exchange that was caught on CSPAN cameras at the event. The BOA executive said: “Bank of America, we’ll help you out”
Considering Rick Perry’s history with the Texas Emerging Technology Fund of helping campaign donors with taxpayer funds it doesn’t take much imagination to figure out what the message from BOA was about. 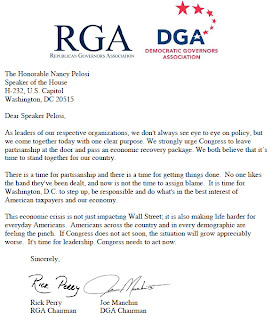 Terri Hall founder of Texans Uniting for Reform and Freedom (TURF) describes the concept of the Trans Texas Corridor as: “A 4,000 mile network of toll roads taking 580,000 acres of private land in TX alone to provide new trade corridors to transport foreign goods into the United States. It’s part of the Security and Prosperity Partnership (SPP)which is the primary step in the economic integration of North America into the North American Union (NAU).”  Brian Williams NBC news report on TTC. During his tenure as governor, Rick Perry made the TTC and the expansion of Government sponsored toll roads a major part of his administration’s agenda. However TTC and toll roads proved to be very unpopular with many Texans. The  TTC concept would of directly impacted over a million Texans with it’s purposed massive use of imminent domain by far the largest attempted in Texas history. New toll roads have been implemented in Central Texas especially in the Austin area and the result has been anything but positive. In a Austin American Statesman article the author reveals the unsustainable nature of   Central Texas toll roads.“Tolls and other revenue have fallen more than $100 million short of covering debt and operating costs of the state’s three-road Central Texas Turnpike System since the highways opened about four years ago. Texas Department of Transportation subsidies almost 70 percent more than originally predicted have made up the difference.”

Who was John Maynard Keynes?
Keynes was educated in British elite institutions, Eton and then King’s College Cambridge. He published a number of  books on economics but his magnum opus was The General Theory of Employment, Interest and Money. To sum up the central concept of Keynesian theory, it’s the belief that free market capitalism is too unstable and Government intervention into the market is necessary to ensure consistent growth in the economy.  It’s a collectivist approach to economics, that government spending and central planning is superior to free market capitalism and it’s hands off approach. Governments around the world have adopted the concept and we see it’s manifestation in the repeated bailouts and attempted economic stimulus schemes. Now that we’ve had decades of  Keynesian theory put into action what has the result been? Lew Rockwell head of the Mises Institute, a Austrian School of economics think tank, wrote in his article The Many Collapses of Keynesianism “The core issue is that 1) we have a monetary and banking system that is socialistic and therefore used by the power elite to enrich themselves at our expense, and 2) the policy elite clings to the Keynesian pretense that government is capable of waging a war against market forces. That, and the fact that Keynesianism empowers the elite, is why this pathetic and dangerous history keeps repeating itself.”
The worlds economy is on the brink of collapse and the methods used by government have failed repeatedly. There is simply no evidence that Rick Perry will do anything significantly different then what the Bush administration and now the Obama administration have done to turn the economy around.